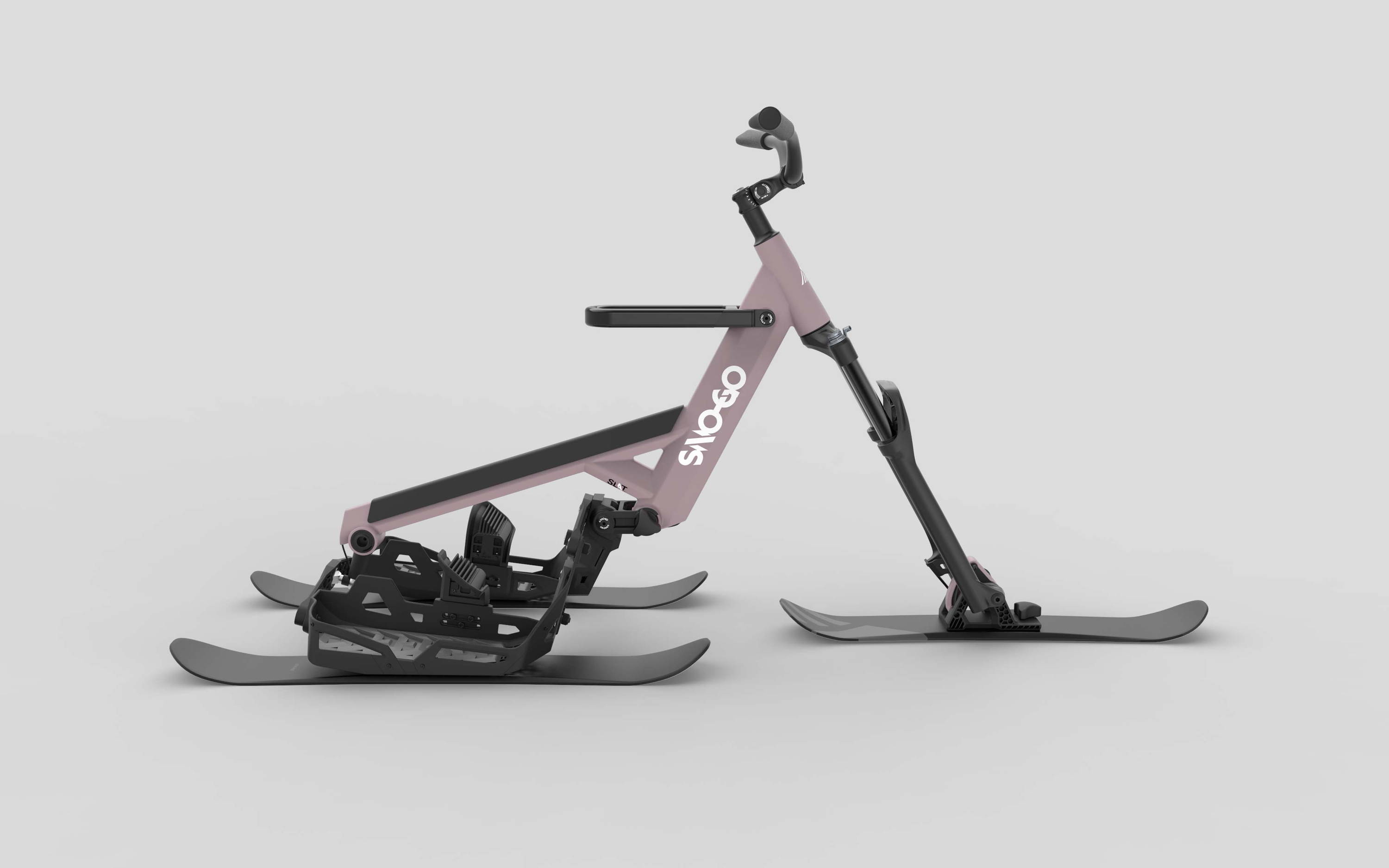 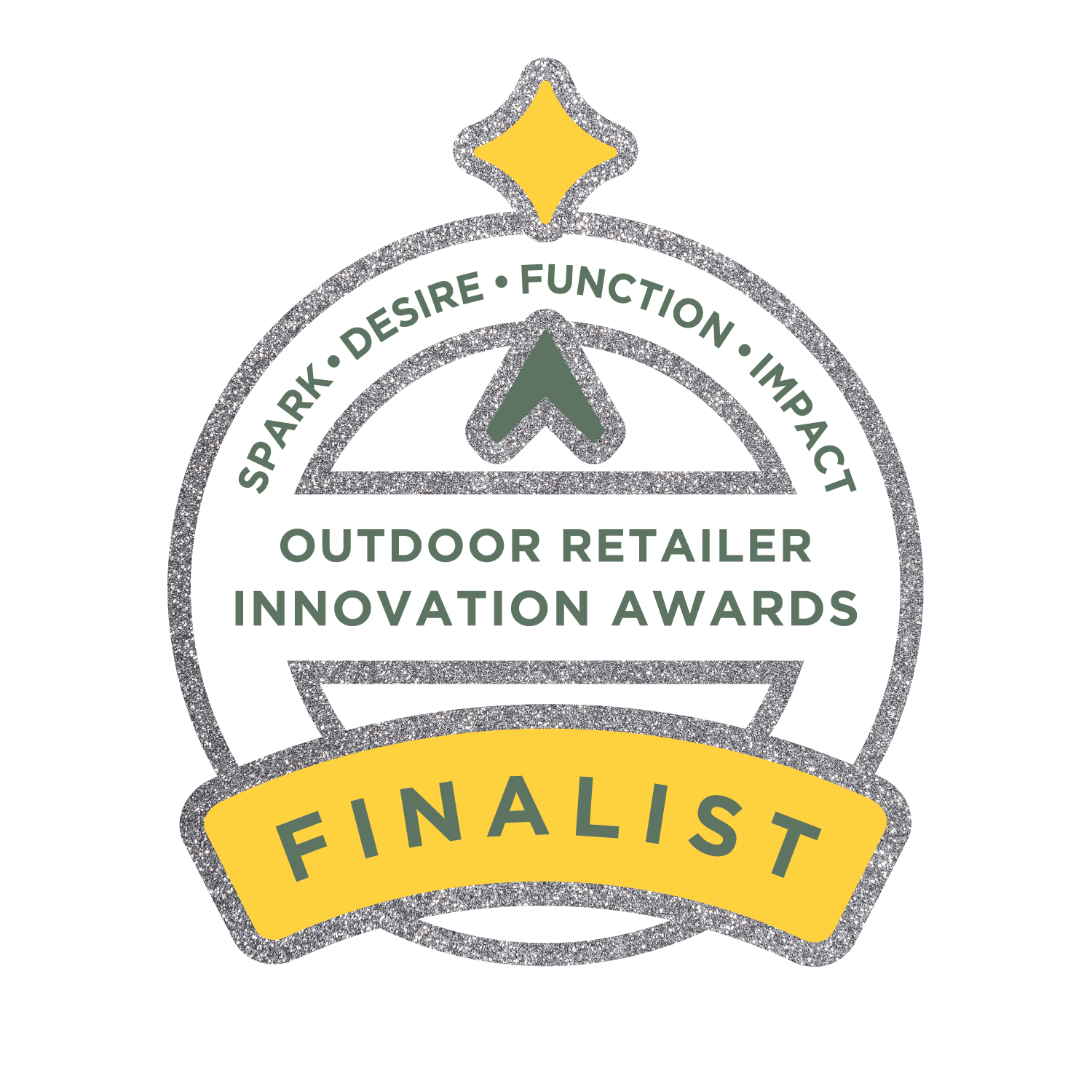 This year marks the five-year anniversary since we launched the original SNO-GO on Kickstarter.

OUR MISSION is to provide the world's greatest access to winter adventure.

IN 5 SHORT YEARS, we've welcomed thousands of people who never thought they’d like the cold, people who thought it impossible to return to the mountains they once enjoyed, and many who are seeking the thrill of exploring new places.

CURRENTLY, SNO-GO is allowed at resorts all over the world with some offering rentals and lessons. Hundreds of instructors are now equipped through the PSIA-AASI to teach others how to ride SNO-GOs expanding new participant growth.

SNO-GO continues to push the boundaries of what is possible in winter sports. 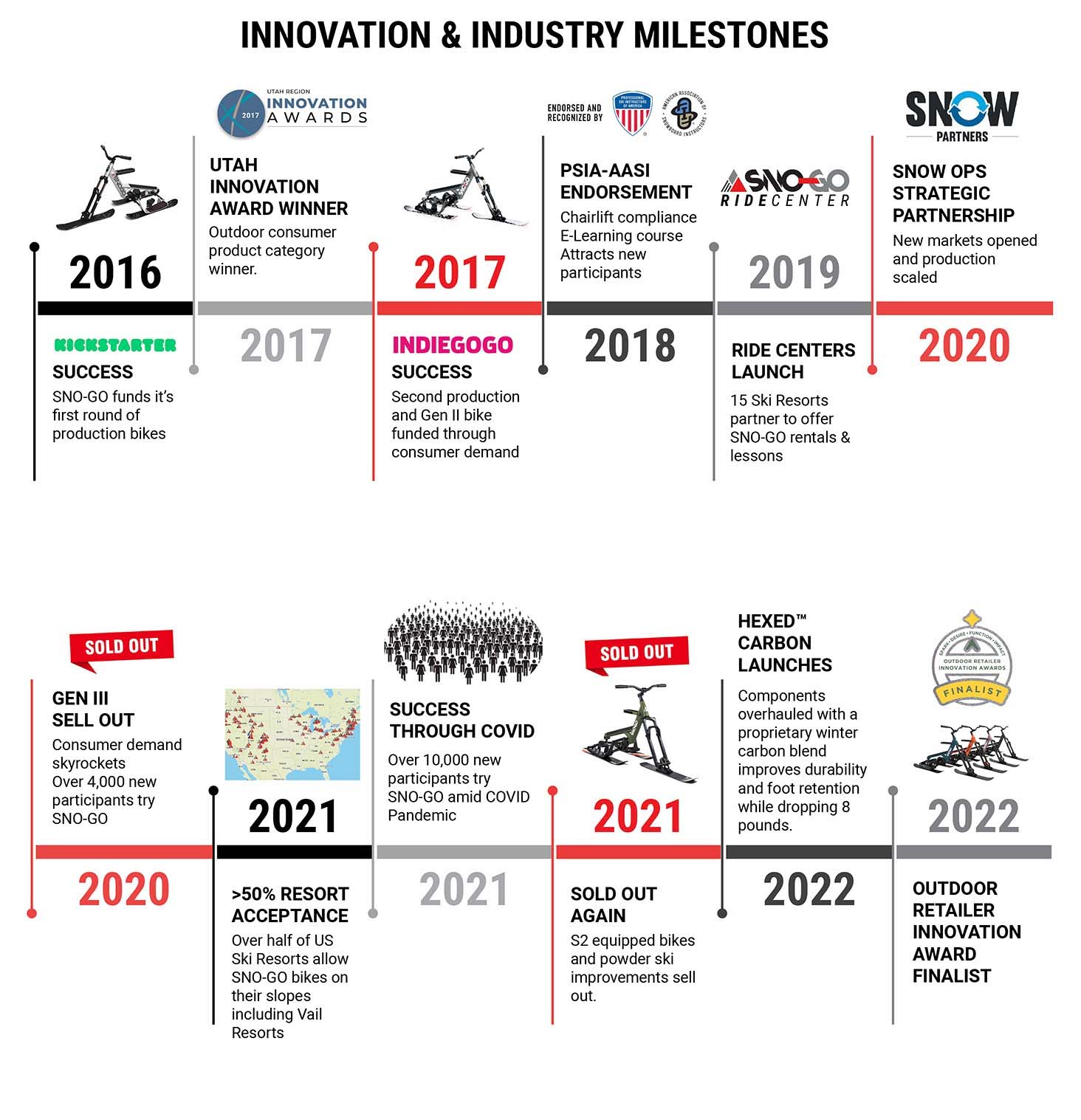 INNOVATION IS THE HEART OF SNO-GO

When SNO-GO® launched it's first bike in 2016, it didn't just happen on a whim or as an idea that had not yet been tested. Co-founders Obed Marrder and Chase Wagstaff grew up surrounded by world-class ski resorts but like millions of others, they never really caught on to the mainstream sports of skiing or snowboarding.

Obed and Chase began their R&D in 2011 by testing other Type I (Skibobs), and Type II skibikes on the market. Frustrated with the inability to have control with other ski bikes, they developed the S.L.A.T. system working with engineer Kevin Scheidle in 2014. Two years later, the geometry began to click and some additions were made for resort and chairlift compliance.

The revolutionary S.L.A.T.™ system and Chairlift Hook™ is only available in a SNO-GO®. These innovations aim to give new particpants total control of their ski experience through all four limbs. The success for users has been immediate with never-ever skiers and boarders learning to turn, stop, and carve intermediate ski slopes within the first hour riding a SNO-GO®. 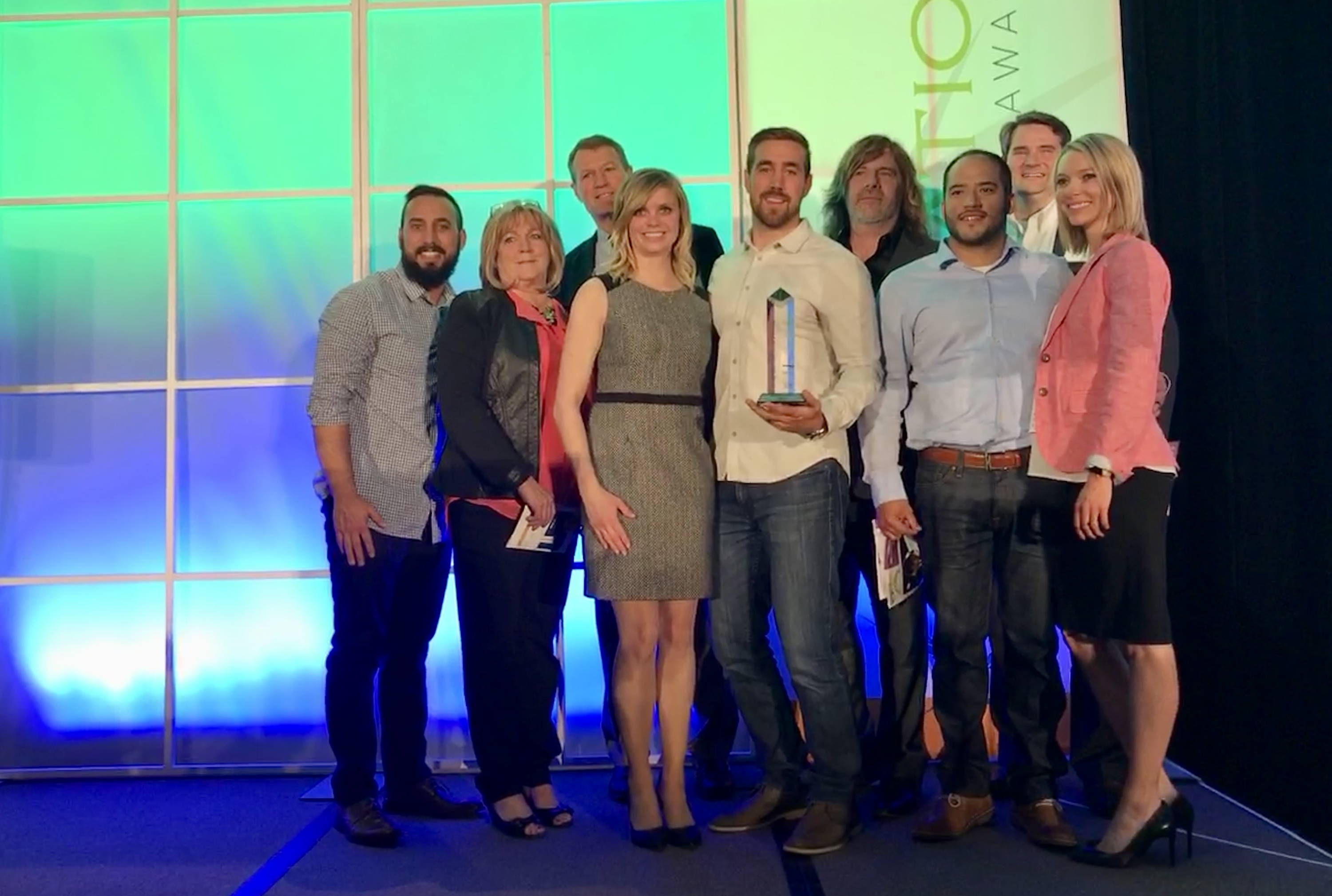 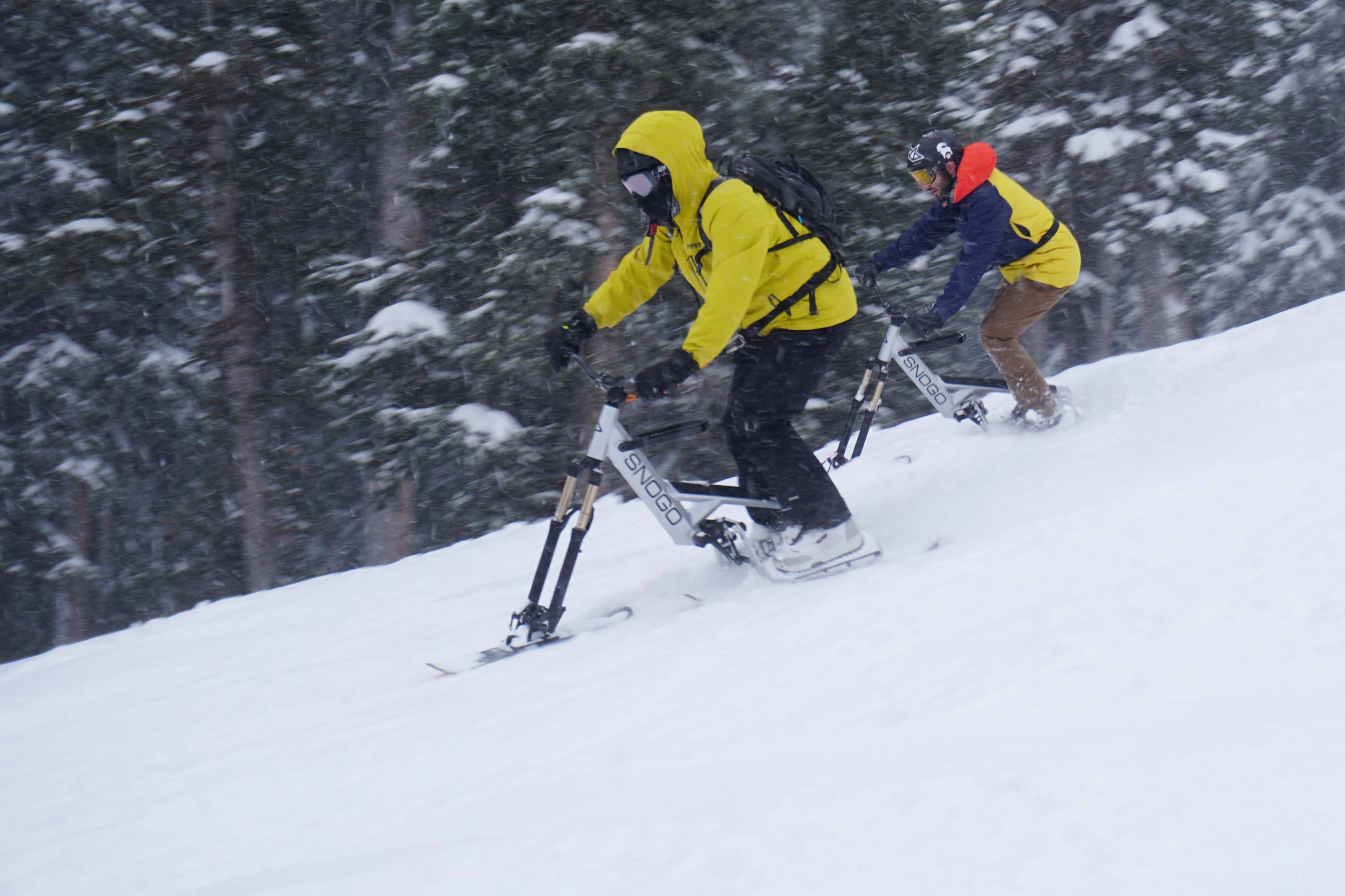 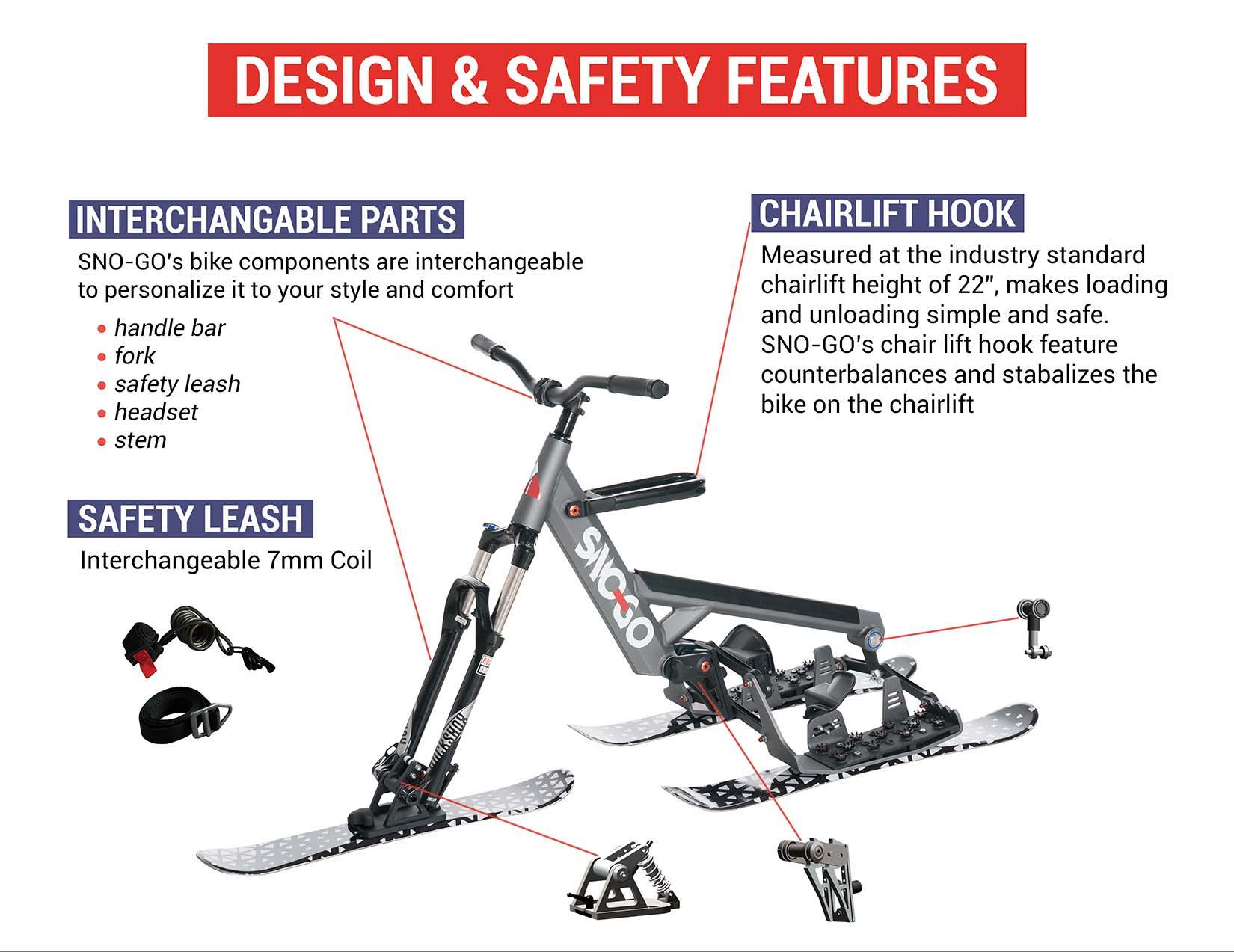 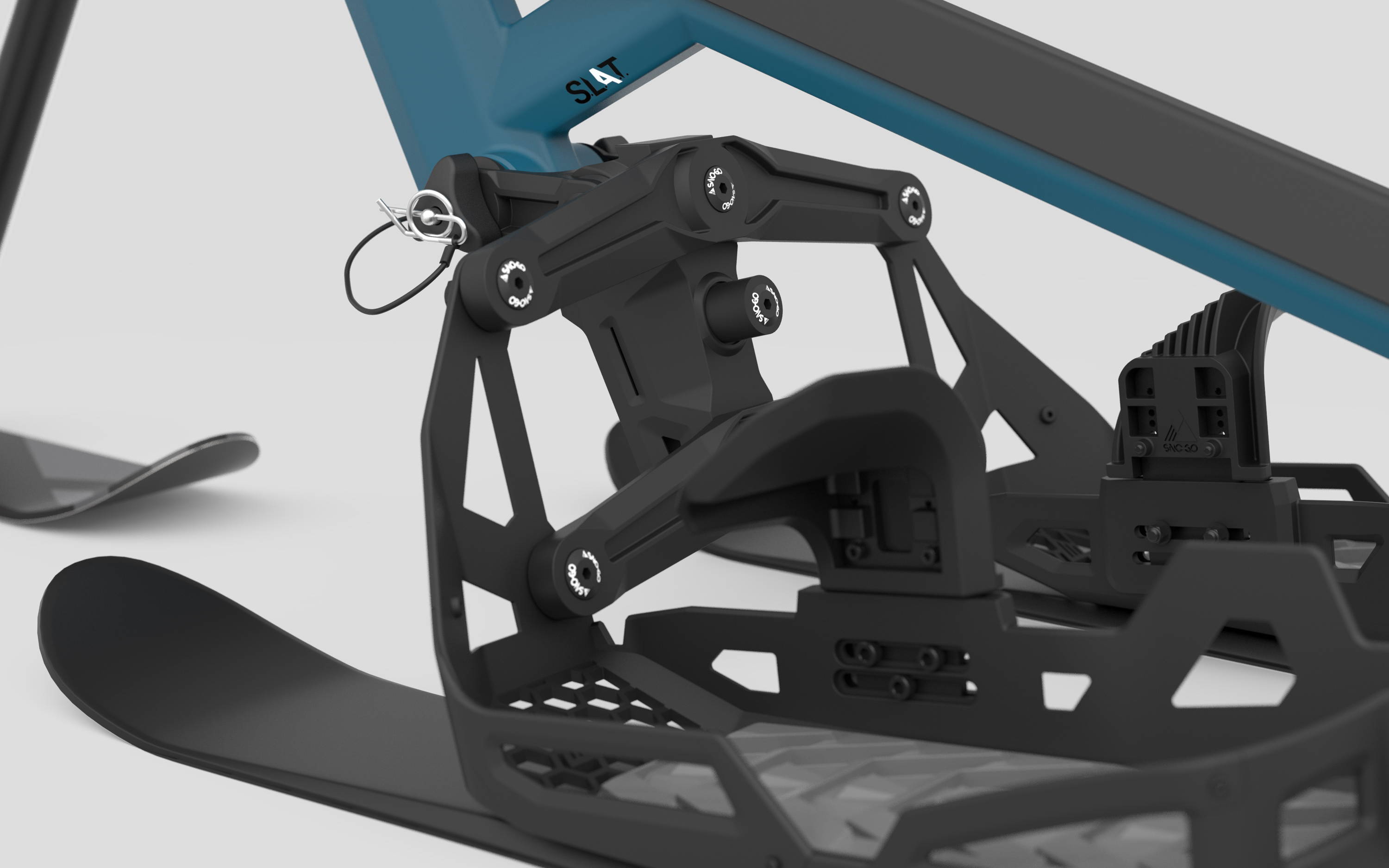 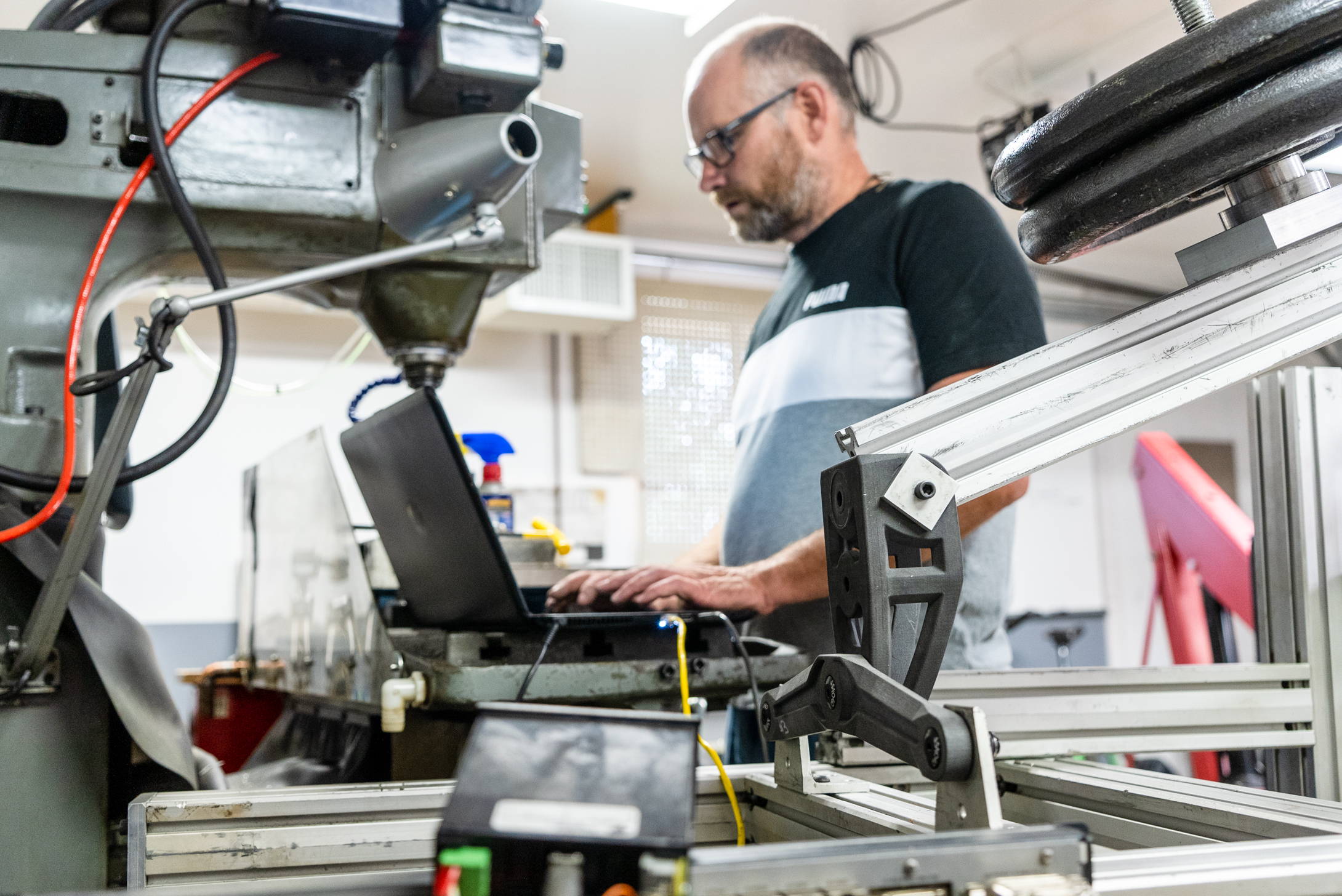 READY TO JOIN THE MOVEMENT?

Upgraded to the powder skis. Headed up to the only big mtn left open here this season yesterday boy did I luck out. 13" of fresh gloppy goop fell in 3 days . The sno go with the powder skis smashed through everything I could throw at it the thing is absolutely amazing with the upgrade. Jumps drops full mosh riding the bike was fully submerged numerous times it was amazing to see the full potential. I said it before this is the future you can only go so far with skis and snowboarding this could be limitless wow thank you sno go

this product right here is the next big snow sport. I bought one and within three runs down the mountain I fell in love with it. the snogo is wicked easy to learn and so fun to use. its a great conversation starter, everyone stares at you. never had this much fun on the mountain in a while. so happy I bought one

I bought one to try out, it was amazingly easy to learn, plus I have a shattered leg that prevents me skiing these days, but on the Snow-Go, I am just fine. I MISSED SKIING!!!! I've had other newbies out on these bikes. They were both able to handle 80%+ of the mountain after only a half day of practice on the bike! They are just as fun as skiis or snowboards but way less time/effort to learn AND way less physical effort overall! Comfortable boots, no buring quads... LOVE THESE MACHINES!!!!

This bike is fun. I thought my playground was the beginner slope which was fine for me but just after an hour I was able to go all the way to the top and come down on a blue trail. So easy to learn. Sensation was combination of parallel skiing and riding a motorcycle. Thank you Sno-Go.

I love this snow bike. Not only is the Snogo ski bike the funnest thing to do in the snow ever the company is awesome too. I had a little mishap with my Snogo which was mostly my own fault. We called the costumer service Monday morning and literally by Wednesday they had the part I needed at my door. Top notch product and top notch service makes this one of my favorite companies of all time. People ask questions and comment constantly in lift lines and I point them all to Snogo and I know for a fact several people have gotten their own Snogo. I would recommend this product to anyone anywhere anytime

Turning the Sno-Go is intuitive and easy. Controlling speed and stopping is also easy--if you know how to power slide on a bike, you'll quickly master the Sno-Go!

I needed just 4 runs on the bunny slopes--mostly to learn how to get on and off the lift. I told the lift operators I'd never before used a chair lift, so they happily obliged me and slowed it down as I got on. I gave the topside operator a hand signal to slow it down so I could learn how to exit the lift. After the 4 bunny runs, I was confidently and demonstrably proficient with the lift.

The resort employees at the two resorts I've visited are awesome and love the Sno-Go, and I've achieved a slight bit of celebrity with it. Lots of skiers and snowboarders gawk, inquire, and take pictures of it.

I'm so happy with my Sno-Go!

When we purchased this bike we had no idea how wonderful the whole experience would be. Our son has a disability and is unable to ski or snowboard, but the Sno-Go meats him where he is. It is built as good as any mountain bike I have owned and the staff is wonderful to deal with when issues arrive (and being 2020 you know there’s issues). As far as our son is concerned, as soon as he jumped on the bike he was moving. I am a bit jealous us of his new ride and think I may have to get another for myself. The staff at Sno-Go have a lot to be proud of.

Downhill skiing never really hooked me but I did it just to get out on the hill. My knees aren’t what they used to be and my feet really don’t like ski boots much. I had just about given up on resort skiing and then the sno-go ad popped up in my news feed. Being a long time lover of mountain biking and winter fat biking, this screamed just do it! So I bought one. After my first day on the bike I realized I should have bought a season pass this year..! I highly recommend watching the instructional videos on YouTube as they made all the difference. This thing can get out of control quickly if you’re not using the correct technique. My sno-go is loaded in the car now and ready for New Year’s Day skiing!

I bought a 2021 Sno-go and received it about 3 weeks ago. Ive been snowboarding for the last 30 yrs and decided I was getting tired of strapping in and out at every run. Pushing myself up to get going isn't getting any easier at my age either. I live near a resort and the last few seasons I wasn't really motivated to go snowboarding much. I needed a change to get me interested and back on the slopes. I decided I was going to get back into skiing again... Then I thought do I really want to deal with ski boots? A friend had told me about Sno-go. I looked it up and was immediately intrigued. I decided to go for it without even trying it first and its been one of the best impulse buys ever! I learned how to ride it after one run down the beginner trail and immediately went for the blue runs. The learning curve is about as low as one could imagine. Getting on and off the lift is as easy as can be! The developers of Sno-go really thought of everything. If your on the fence about purchasing one of these, then I highly recommend you jump over and onto a Sno-go! Its the best thing I've ever done! I could go on and on about Sno-go has changed my life, but trust me you'll have be wanting to write an awesome review after you try it for yourself!

Best time I’ve had in many years! Only took 2 days of riding to be able to zig zag around trees and go off jumps and other fun terrain! Best purchase ever!

Not only do these skis keep you aloft on a pillowy powder day, they’re equally amazing in the terrain park! They’re exactly what the SnoGo needed to truly be the Kind of the mountain.

Bought my first Snogo two years ago.
It's put new life in this old ski body.
It's now the grand kids go to toy.
I got a new 2020 red Snogo with the S tower.
Fat skis next.

Was absolutely amazing!!! Super easy to learn! I loved the fact your feet aren’t strapped in to the bike.

The snogo bike is perfect for most ages. Great thing todo with the family!

My friend never skied before and he learned how to use the sno-go bike before me!

It was the coolest experience riding the sno-go bike and I look forward to the next time I ride!!!

I snowboard, ski and now SNO-GO. I advise everyone that stops me to buy one. If you reading this review then you have already been interested, Dont hesitate buy one.